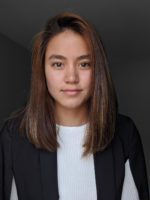 Did you know that the most valuable parts of a shark are their fins?

The trade in shark fins is estimated to be worth 400-550 million USD annually and kills up to 73 million individual sharks. Shark finning which is the practice of removing the fins of a shark and discarding its body at sea is driven by the high value placed on a shark’s fin. A bowl of shark fin soup can cost up to $100 which motivates some fishermen to cut the fins and discard the body which is bulky and less valuable. This practice uses only one to five percent of the shark and contributes greatly to the endangered status of some of the shark species. The shark fin industry continues to operate because of its reputation as a luxurious commodity and its incorporation within traditional Chinese cuisine. The fins of a shark have no taste or nutritious value but are often consumed at government events, weddings, and high-class events due to its symbol of status.

Why does it matter?

Sharks are vulnerable to exploitation because they live long, mature late, and have few pups. Currently, among 470 species of sharks, 2.4% are critically endangered, 3.2% are endangered, 10.3% are vulnerable and 14.4% are near threatened.

The disappearance of the shark species within an area can cause a trophic cascade; where a change in their population trickles down throughout the whole ecosystem. Sharks are an apex predator, serving a valuable purpose from species population dynamics to the structure of the ecosystem itself. In some areas, due to anthropogenic pressures and overfishing, changes to biodiversity and productivity have already been observed.

For example, along the eastern coast of the United States, the population of sharks has declined to the level of functional elimination, rendering them unable to perform their role as predators. Simultaneous to their decline, rays, and skates which were their primary prey, increased in abundance consuming the scallops, clams, and oysters. By 2004, predation by the cownose rays had removed most of the bay scallops which resulted in the termination of the North Carolina fishery.

In addition, due to the loss of sharks, 90% of Jamaica’s coral reefs are now covered in macroalgae reducing the marine biodiversity once observed. Coral relies on herbivorous fish to graze algae and provide the necessary space to grow. The decline in sharks caused an increase in grouper fishes who eat herbivorous fishes allowing macroalgae to multiply. Coral reefs not only support over 4,000 species of fish but they also provide coastal protection, a resource for fisheries, compounds for pharmaceuticals, and increase local tourism. These two examples show how the lost presence of sharks can cascade throughout the ecosystem affecting the habitat of multiple species, multiple industries, and local economies.

The trade of shark

York University’s partnership with the Global Footprint Network (GFN) provided me the opportunity to learn more about the Ecological Footprint, which is the production and consumption of the world in relation to its long-term sustainability. Through my final assignment, I was able to investigate the production of shark and its related trade to understand the global demand for sharks.

To begin, I wanted to set the boundary between 2007-2018 (most recent data available) to see how much change can be achieved within a decade. To understand how much captured shark was reported by the world, I summed up all the values for species name like “shark” also including Smooth-hounds, Narrownose Smooth-hound, Smooth-hound, Slender Smooth-hound, Spotter Estuary Smooth-hound, Starry Smooth-hound, and Dogfish, to try to get an estimated representation of how many sharks were captured by the world over the years. I recognize that the data being portrayed may not include all the shark species that are reported in the FishStat database of the Food and Agriculture Organization and that not all catches are reported. Therefore, the global catch may be more than what is reported in this article. 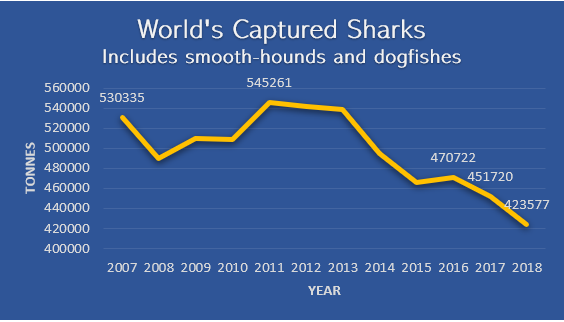 According to the National Footprint and Biocapacity Accounts 2021 by GFN, there have been over 400 thousand sharks harvested annually to meet the global demand.

It is reassuring to see a downward trend of approximately 20% in the last twelve years but, these numbers only show what is known and do not account for the illegal fishing and bycatch of sharks. Bycatch of sharks which is the term for an unintended catch is estimated to be in the millions but is not accurately reported in most fishery statistics. 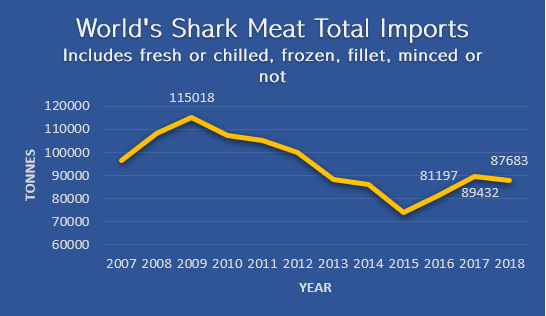 Remaining within the topic of demand, the trade of sharks has also decreased within a decade.

According to a TRAFFIC report, sharks have had a history of being mislabeled in order to overcome customer resistance to the meat. Sharks are often relabeled as rock salmon, catfish, dogfish, and ocean fish. A list of shark names in different languages can be found here. Therefore, this data only represents the imports of shark meat accurately identified. 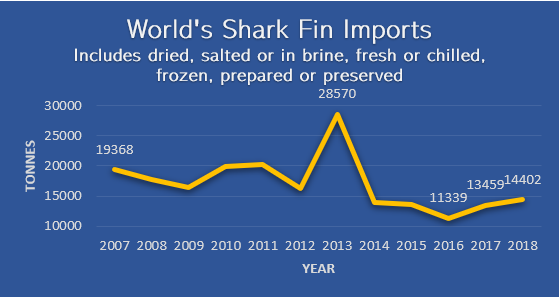 It is encouraging to see a significant decline in the trade of shark fin most notable between the years of 2013-2014. Within the last twelve years, shark fin imports have seen an approximate 31% with its top 3 importers being China at 8204t, Singapore at 1662t, and Sri Lanka at 754t in 2018.

The decline in the demand for sharks can be attributed to several reasons such as updated trade codes for better categorization and transparent reporting, pressure from conservation groups, educated consumers, and changes in regulations and legislations. This shows that through more global efforts, the demand for sharks and related products can continue to decrease to ensure the species’ long-term sustainability.

Additional action is required to protect threatened shark species and to restore affected ecosystems. It is imperative to take collective action now before accumulated changes go beyond the ocean’s tipping point which is the point where small changes become significant enough to create larger changes. Among a global shark crisis, one person can make a difference and it starts with knowing what you are buying and advocating for the change you want to see.

This article is dedicated to Rob Stewart who corrected my perception toward sharks through his documentary Sharkwater. Prior to this, I had the belief that sharks were the evil predators of the ocean, eliciting irrational fear every time I stepped into any body of water. Sharkwater showed me the beauty of a highly misunderstood animal and opened my eyes to the devastating consequences of the shark fin trade. His passion inspired me to love the things that I do not yet understand because everything has its own purpose.