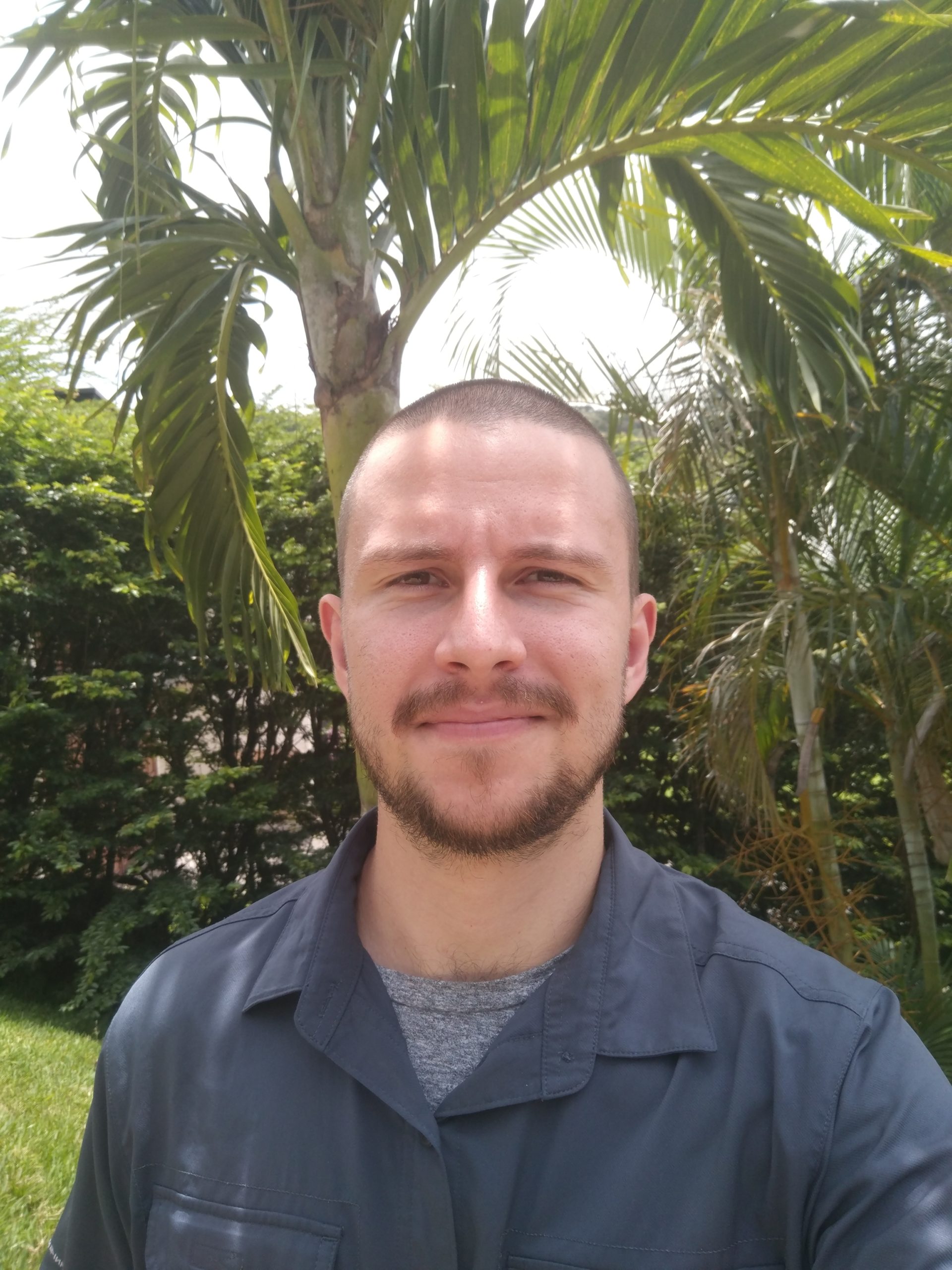 Since its birth as a republic, export and cash crop based agriculture has been deeply rooted in Costa Rica’s economy, environment and culture.Economic dependence and a risky habituation to cash crops has led to a series of complex socio-economic and environmental issues.Most have been related to problematic mono-cropping, human rights abuse and mass deforestation linked to transnational companies using the excuse of job creation as a Trojan horse to take advantage (intentionally or not) of economically vulnerable and marginalized communities.

For a long time, Costa Rica was very much a Coffee Republic. Coffee plantations covered the emblematic valleys of San Jose (the capital city today) well into the late 1900s and as a crop, it holds an important cultural and economic value for the country.

To this day, coffee farms are still a central aspect of many typical Costa Rican landscapes,

economies and cultures. However, it is currently a market in decline due to Climate Change, competitive international trade, intermediate oriented trade logistics and a shift in national economical priorities, amongst other reasons.

Historically and spatially, coffee is the crop that has had the largest ecological footprint in terms of production reaching a peak of around 700,000 global Ha in the late 1980s and early 1990s.

This has somewhat stabilized and been reduced to about 300,000 global Ha over the last decade.

Coffee is still the crop that occupies the most space in the country at about 80,000 hectares (an impressive 1.5% of the national territory).

of quantity, Costa Rica’s strategy is more focused towards quantity which is in turn highly dependent on the specific geographic characteristics of a farm. High altitude farms for example are much more likely to produce better tasting coffee beans. This shift towards higher quality coffee might see a shift in the overall spatial distribution of coffee in the country as more and more lower land coffee plantations lose their competitive advantage to other producers.

In terms of its exports, most of it is exported to North America and Europe. Generating a footprint of about 500 global Ha as it is exported. 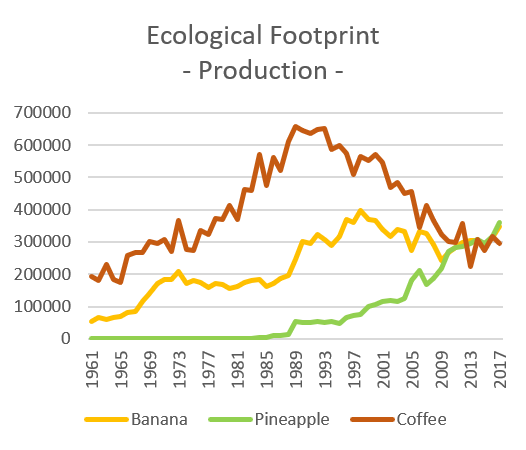 Then came the United Fruit Company, searching essentially for cheap labour to grow bananas. The start of this stage in history holds particularly dark times in Latin America’s memory.

The countless accounts of exploitation experienced by banana plantation workers under the rule of the United Fruit Company are now deeply rooted in Costa Rican culture and heritage.

As per usual when in the midst of social struggle, this stage inspired shockingly crude art in a variety of forms that has shaped portions of the national culture for decades.

Among many others, “Mamita Yunai” or “Mother United States” in English, is a great example of this as a famous Costa Rican book which narrates the stories of injustice experienced by banana workers through tones of magical realism.

Banana production footprint after 1961 paralleled coffee’s rise but was never quite as much.

During the last decade it has been closer to 300,000 global Ha and the total area used to grow it in the country has remained relatively stable since the early 2000s at around 40,000 global Ha. This accounts for about 0.8% of the national territory.

Exporting bananas is logistically more complicated as it is a fast-ripening fruit unlike coffee which is exported generally as a green bean or as a processed product.

Bananas may also be less spatially efficient than coffee (each plant taking up more space).

This may account for the higher Ecological footprint of banana exports particularly over the last decade averaging about 3000 global Ha. 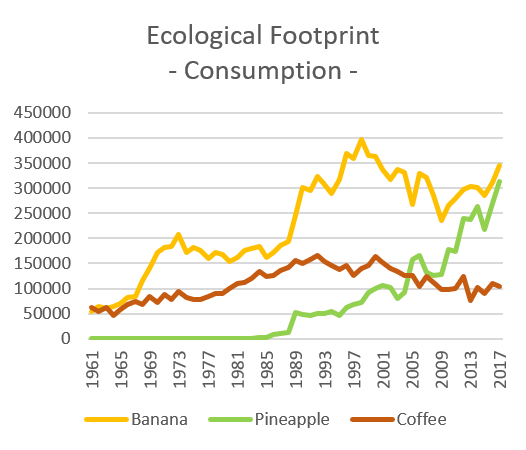 This continued until the late 1990s and early 2000s when banana and coffee production decreased significantly (particularly for coffee). Curiously, pineapple´s production footprint continued to rise as it continues to do so today.

Economically, environmentally and socially this has been a transition period in which most of the larger scale crops in Costa Rica are dominated by transnational companies.

This is reflected by the fact that by the early 2010s, Costa Rica was already and by a distance, the world´s largest exporter of Pineapples in the world.

Between 2012 and 2018, around 62% of global pineapple exports came from Costa Rica. With the USA being responsible for 41% of the global imports in that same period of time. Followed from a distance by Europe, Canada and Japan.

Interestingly, non of these countries are tropical (with a few regional exceptions) thus making the extravagantly tropical image of a pineapple quite appealing and easy to market for. Particularly when the unethical details regarding its production are omitted.

By 2015, ecological footprint of pineapple exports was about 2000% greater than coffee and bananas.

A particularly alarming issue when considering that since the 1980s, there has a been a growing trend of pineapple production in the country and while the other 2 crops occupy about the same space as they did 30 years ago.

Pineapple is not typically grown in the same areas as coffee, so it is most likely not filling in that gap directly.

However, pineapple is grown in more often than not in and around economically vulnerable areas such as the city town of Buenos Aires in the south East, the municipality of Milano de Siquirres in the East and the Huertar region in the North West. Coincidentally (or not?) they all also have important presence of marginalized indigenous populations.

It is not particularly wise or healthy to ignore this type of patters as it is essentially an upgrade to the operational blueprint laid by the United Fruit company and now led by Del Monte among other national and transnational companies.

Yes, it must be recognized that the pineapple industry represents an important contribution to Costa Rica’s GDP, and it has provided some economic relief in some areas.

However, it also represents a proportionally massive ecological footprint particularly with its exports accounting for around 65,000 global Ha on average in the last 10 years...

In a country where eco-tourism is also a large contributor to jobs and GDP, these are all major considerations that should perhaps be taken more seriously. 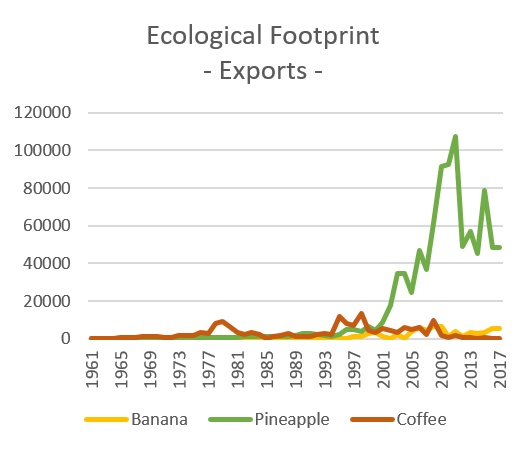 IS IT REALLY WORTH THE TROUBLE?

By looking at the Socio-Ecological Footprint of monocropping in general, it is not irrational to assume that the externalized social and environmental costs that the government or third-party individuals will have to assume as a result of irresponsible monocropping / industrial practices are likely to be very high...

It is not just a good climate and cheap labour that attracts monocrops, it is also the very seductive and irresponsible combination between shady Free Trade Agreements and an absurdly lenient agrochemical regulation… All hidden shamelessly behind the country’s green reputation.

Will such a reputation be viable to maintain after large patches land are scared by the excessive use of agrochemicals in a few years?

Is agricultural sovereignty a priority? How can it not be?

Is the excuse of job creation really valid when Buenos Aires - a hub for pineapple plantations - is consistently one of the poorest, most vulnerable, marginalized and politically under-represented cities in the country?

Where is all the wealth created by pineapple plantations going?

Is there enough wealth left in communities near plantations and indirectly involved workers to justify the massive cost of social and environmental externalities created by irresponsible mono-cropping practices?

So far it seems that a disproportionally large part of this wealth flows in the same directions as the pineapples themselves… leaving behind nothing but a massive Ecological Footprint and some cents.